In 2010, not-quite-randomly generated prime numbers allowed a third-party to factor RSA moduli (in bulk). A survey of tens of millions of moduli over hundreds of millions of domains today shows that this specific vulnerability has been fixed.

The establishment of a TLS/SSL connection relies on asymmetric cryptography: the server keeps a private key, the server distributes a public key, and a client uses a public key to perform a handshake with the server.

Often, the cryptography used has been RSA, in which the public key is an exponent and a modulus. The modulus is a product of two large primes, and the inability of factoring the modulus into its two primes is what makes the private key private.

With current commodity computers, integer factorization looks Significantly Hard as a direct strategy, and an oblique strategy can be significantly faster.

The Greatest Common Divisor of two similarly-sized numbers runs proportionally to the square of the number of digits; on a 2018-era laptop, finding the GCD of two numbers a few hundred bytes long takes well under a second.

One’s public key modulus usually comes from a machine that randomly picks prime numbers. If not enough randomness is used to generate prime numbers, two moduli can share a prime, and then anyone with one can break the other.

And that misuse of a prime-number generator is what had happened several years ago: Lenstra, Hughes, et alii found some reuse of primes, as did Heininger et alii (who explained the product/remainder tree for efficiently computing GCDs), and the EFF started monitoring SSL certificates in its Observatory.

Taking pairwise GCDs in a dataset of a million or so is expensive enough to be daunting, but running a GCD tree on a few million several-thousand-bit numbers runs in just about an hour on a 2018-era computer. (Hence the reticence in Lenstra to publish the algorithm.)

The GCD tree, as described by Heininger, works roughly as follows: 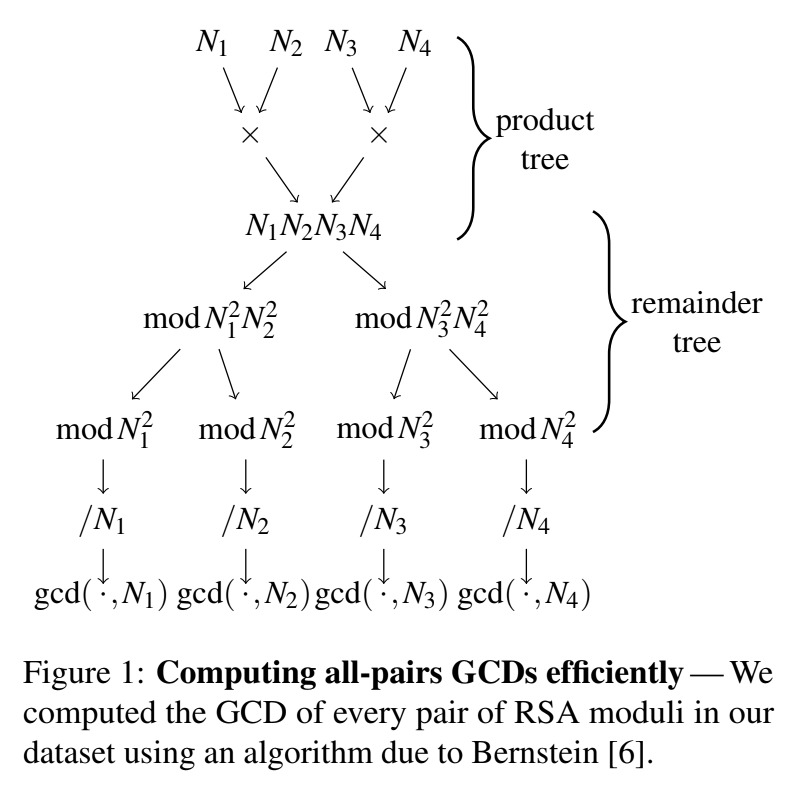 There are many ways to implement this. Based on existing language runtime defaults for integer arithmetic, Gnu MP is by default in Haskell/Julia/Ruby/Guile/Racket. One implementation of batch GCDs in Ruby performs well (as the product starts getting over 1MB in length, the math library time starts representing the vast majority of the runtime, so make sure you’re using GMP, and there is another batch GCD in Python.

No active certs had this vulnerability!1 The papers from 2010 indicated that the majority of the undersampled randomness came from only a few systems, none of which are still in use.

Two2 certs3 in the scan each had a modulus with a common factor.

I’ve reached out to the owner of one of those, and will post any updates.